The pump impeller converts the mechanical energy into the static pressure energy and dynamic pressure energy of the conveying fluid. It is a bladed roulette. The manufacturing method of the impeller is usually casting or welding. The material can be selected according to the working environment. There are many impeller types. It can be divided according to the impeller shapes, structures and working modes.

As a pump foundry, we have produced various types of impellers. This article will explain in detail the variety of impeller types.

According to the structure

According to the impeller structure, it can be divided into channel impeller, vane impeller, spiral centrifugal impeller, and swirl impeller.

The channel-type impeller has a wide flow path and can pass through large solid particles. So, it is also very suitable for conveying fluids containing large particles of impurities or long fibers.

So, the helical centrifugal impeller is suitable for conveying fluids containing large particles and long fibers.

The swirl impeller is in the shape of a disc. The leaves are evenly arranged radially. When the impeller rotates, the liquid creates a swirling motion.

In terms of performance, swirl impellers are less efficient. The efficiency of the swirl impeller is only 70% of that of the ordinary closed impeller.

According to leaf form

The closed impeller is the common impeller of the pump. Manufacturing is more difficult. Its structure consists of three parts: wheel disc, wheel cover and blade. Closed impellers can be used to transport liquids with relatively low viscosity. Such as water, solution, etc.

Unlike open impellers. The semi-open impeller is suitable for conveying fluids containing suspended solids. Such as solid particles and fibers.

The mechanism of the open impeller is relatively simple, and there is no cover plate. Only blades and blade stiffeners. And it has fewer leaves. Only 2-5 pieces.The working efficiency of open impeller pumps is low. few applications. It is usually used to transport liquids with higher viscosity and slurries.

According to the working method

Although the price of the double suction impeller is high, it is still the best choice.

JC Casting is an impeller foundry in China, we can cast various types of impellers, pump housings and other pump components. If you need it, you can contact us at any time. [email protected]

Casting is one of the most popular ways to make lasting and quality components. Casting has a high level of detail. It does not need additional fabrication or assembly. Many…

Casting VS Forging There are several different methods and techniques in manufacturing metal components.Castings and forgings are 2 of them. What is casting or forging? What are the differences between… 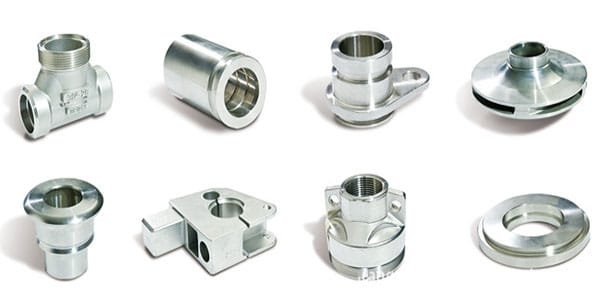 What’s the difference–304 VS 316 Stainless Steel? 304 and 316 stainless steel are the two of the most widely used stainless steel casting grades in the world. Both of them…

Advantages of 3D Printing for Investment Casting Currently,3D printing manufacturing technology is the focus of attention in the molding process. Can it be used in the precision casting industry?The advantages…

Brass, for most people, is one of the best metals to cast. The reason lies in its unique properties used over the years to make almost everything from coins to…